I love to travel.

As soon as I took my first steps outside of the United States at 16 years old (which happened to be in Costa Rica), I knew from the dance of Spanish around me and the sweet, charred scent of fried plantains wafting through the streets that some sort of switch had been flipped. Even after I moved to Costa Rica a few years later, I found that, while weekend trips to the beach and tourist attractions were a good time, I was more than content to plant myself at a café, simply watching the people around me and soaking in every detail I could.

My three years in Korea were no different. No matter how accustomed to the everyday Korean lifestyle I became, I could never stop marveling at the sweet, yet foreign simplicity of it all. I learned the language, I worked with other Koreans, my daily diet consisted of lots of kimchi, and my fashion choices even changed. Just as I did while living in Costa Rica, I allowed myself to absorb every facet of the culture in order to really gain a new perspective and see the world through the eyes of the people surrounding me as best I could. I’ve found that as an American, I was raised to hold tight to my patriotic beliefs and embrace my native culture above all else. I’m proud of my American heritage, but it’s amazing what kind of growth can happen when you relinquish your grip a bit, begin to cling a little less tightly to the ideas you were raised on and let some new ones start to trickle through.

And, since I’ve always been more of a long-term travel kind of person, I have only recently begun to crave the short-term experiences. I did do some traveling around Asia while I lived in Korea (Thailand, Hong Kong, Japan, and Taiwan), but since I moved to Israel, I’ve been largely preoccupied with adjusting to Israeli society. Living in Israel has been a completely different experience for me than living in Korea, and I think this is mainly because here I am a citizen. Not only do I live amongst Israelis, I am Israeli. I have yet to decide if the pressure I feel to act Israeli (whatever that even means) is external or some sort of expectation I’m shoving onto myself. Let’s just say that this is a whole new kind of identity exploration!

Anyway, I decided I wanted to go somewhere I’d never been, to step outside of my environment and all its expectations for a little bit, and reconnect with myself, unbridled. As a Lizzie McGuire aficionado, Rome had always been on my bucket list, so when I found a good price on airfare to the Eternal City I didn’t have to think twice.

Four days, one me, infinite possibilities.

Cheesy, I know. But seriously.

Some people think it’s weird, but I LOVE traveling by myself! There’s no one to tell me where we have to go, what we have to do, or when we’re going to go where. Besides, making genuine connections with other humans in another part of the world is half the fun! When I travel alone, it is much easier for me to seek out the company of others and strike up conversations with the locals. As I usually do, I stayed with an Airbnb host, and I could not have been more grateful for her conversation and authentic friendliness! Tania, who lives in the cutest little apartment you’ve ever seen just outside of the city center, is independent, into Pilates, and has her own laidback sense of style. We had a lot in common, and some of my favorite moments from the trip were spent at her kitchen table drinking Prosecco, eating fresh mozzarella, laughing about men, and simply relaxing. I only spent four days with Tania, but her upbeat, open, and self-sufficient spirit inspired me. 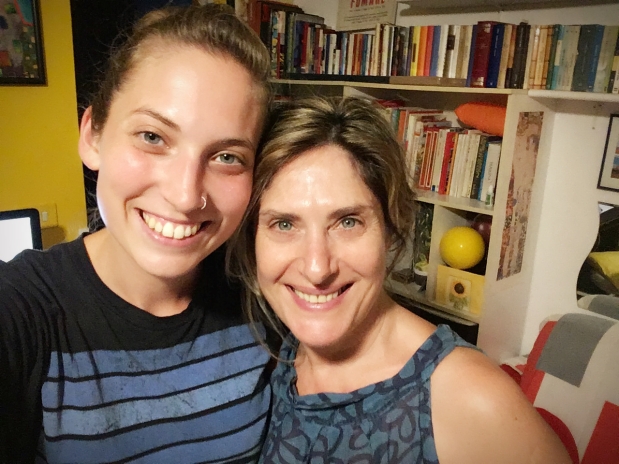 Throughout my trip, the right people just sort of kept popping up at all the right times. At the suggestion of some friends in Tel Aviv, I found myself wandering the Jewish Ghetto in search of a particular restaurant and somehow ended up in the basement museum of the Great Synagogue of Rome. To be honest, I didn’t really care very much about the dozens of Libyan Torah covers on display, but my ears perked up at the sound of unaccented American English from the guy in front of me in line. My introverted self took a big breath, said hi, and the conversation took off. I found out his name was Alex, and he’d been born in Surinam but had grown up in Philadelphia. We ended up touring the rest of the museum together, even visiting the synagogue where he very amicably agreed to take a yoga photo of me on the steps. 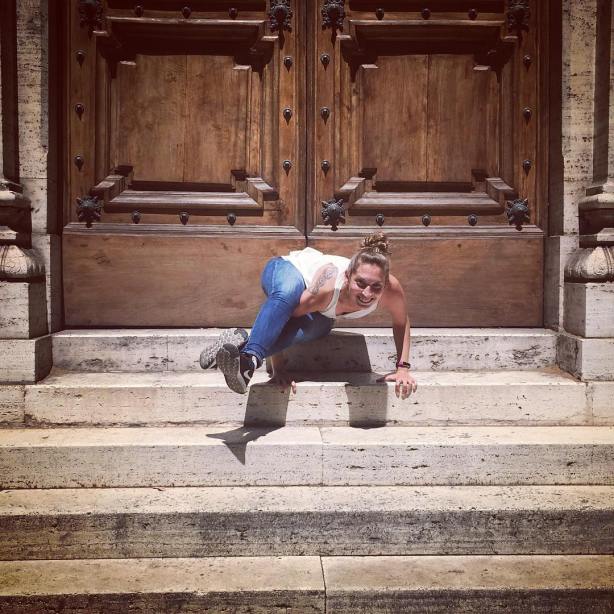 Alex and I soon discovered that we’d both set out in search of the same food, carciofi (fried artichoke), a famous Roman Jewish dish. As Tania told me later, non-Jewish Romans flock to the Ghetto whenever they’re craving some crispy, golden carciofi, and after I tried it I could see why! There is a gorgeous little hole-in-the-wall restaurant in the Jewish Quarter called Sora Margherita (recommended to me by my Tel Avivian friends), and it did not disappoint. If you find yourself in Rome and decide to hit up this gem of a place, take my advice: don’t skip the tiramisu.

After we’d stuffed ourselves full of carciofi and pasta, Alex and I parted ways. I headed off to the Vatican and he headed on his way to G-d knows where, which is much of the beauty of making friends while traveling. You connect for the moment and you cherish those moments for what they are, without expectation. I’m sure Alex will kick ass at Harvard med school, and I’m sending him all my good vibes!

Now, I’ll be honest: because my obsession with visiting Rome stems largely from my childhood love of the Lizzie McGuire Movie (hey, it is what it is!), I really wanted to go on a date with an Italian boy. Again, no future expectations. Just me, a handsome Roman man, a glass of wine, and mandolins playing in the background with the moon in the sky like a big pizza pie.

The universe came through!

Enter Stefano, who was not Roman, but Sicilian. He was an absolute gentleman, and we shared a lovely evening eating pizza, walking the lamp-lit streets of Rome, and sipping wine on the steps of a statue etched with a quote from Mussolini. Honestly, it doesn’t get much better than that, and I’m preeeetty sure he surpassed Paolo by lightyears! So, thank you, Universe, for giving me not only my date but a kind new friend to go along with it.

(Side note: his accent is so beautiful and it literally sounds like music every time he speaks. Swoon!)

The other important person I met was Amber, and we happened upon each other by pure chance. Because my flight back to Tel Aviv was so early in the morning, I decided to get to the airport the night before. A word to the wise: finding your bus to Fiumicino from Termini Station is not as easy as you think it will be. After I wandered around searching for that damn bus for what seemed like ages (and Termini is a pretty creepy place after dark), I gave in and asked the first girl I saw if she knew where the stop was. To my relief, she spoke perfect English, said she was looking for the same bus herself, and suggested we search together. Amber is originally from the Netherlands but had been studying in Rome and was on her way to Croatia for a quick vacation. Not only did we discover that our flights were leaving at the same time from the same airport, but we were flying the same airline and our gates were right next to each other! Amber’s lovely presence made the hours waiting for my flight the perfect wrap-up to a perfect trip.

I’d gone to Rome to reground, gain new experiences, and make genuine connections with others from a different part of the world. In doing so, I was also able to reconnect with myself, which was something I desperately needed after feeling so worn out and beaten down over the past several months. There is just something so delightful about being alone with yourself in a foreign place. You have only yourself to help you navigate (aside from Siri and people on the street), and you have no choice but to trust your own judgment. Your decisions stand. You’re completely in charge of every moment.

That gelato you’re eyeing? You got it.

You want to take a detour down a random alley on your way to the museum no one else wants to go to? Go for it.

Feel like standing in the middle of the Sistine Chapel for an eternity, just staring in awe and trying to get your breath back? No problem. You’ve got all the time in the world.

Rome was a delight for my senses. Every. Last. One of them. The smell of Roman street food making my mouth water. Silky, rich espresso after a carbohydrate-packed lunch. The musical jaunt of the Italian locals singing their native tongue as they go about their everyday business. The cobblestone streets and rustic buildings that I swear must be something from a painting come to life. I was able to soak up every single detail into my being, relishing in the quiet of my own self amidst the bustling city around me. The Italians taught me that there is always time for wine, that the night is young, and that beauty can be found in even the most mundane places. Being able to experience the wonders of this ancient city is a memory I’ll always cherish, and for that I am truly thankful. Grazie, Roma!